10 Cities Where Housing is on the Rebound.

According to Michael Kling of Investopedia (www.Investopedia.com), the following US Cities are poised for rebound: 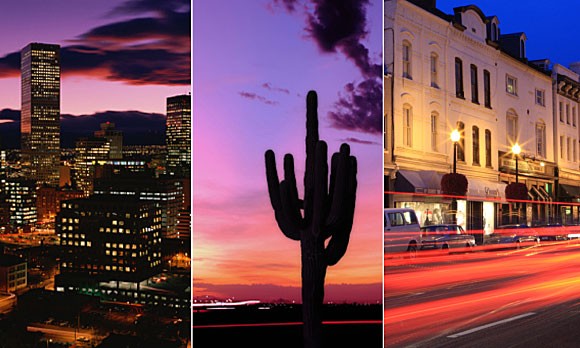 1. Minneapolis – up 3.2%. Manufacturers such as 3M, and high-tech industries are hoping to benefit from the coming recovery. Minneapolis-based U.S. Bancorp is among the healthiest U.S. financial services companies, according to Moody’s.

4. Chicago – up 1.7% following a 2.7% increase from June to July due to first-time homebuyer tax credit that has motivated buyers.

5. Phoenix – up 1.6% after a 1.8% increase from June to July. The city was one of the hardest hit in the real-estate bubble. Prices have dropped by more than 25% since last year.

8. Washington DC – up 1.4%. and fell almost 8% since last year. The city is somewhat protected by a reliance on government employment.

9. Denver – up 1% – Prices there fell only about 2% since last year and have avoided the real-estate bubble that hit east and west coast states.

10. Seattle – up 0.1% with 3.8% increase predicted over the next few years. The real-estate market suffered less than others, as prices fell 15.2% over the last few years.

According to Forbes, the following cities are the most overpriced markets.

The 10 most overpriced metro areas – where houses are sitting longer because Sellers are asking too much for their houses.

As a professional ASP Home Stager, we need to stay on top of the statistics for markets around the country, and in our own markets, to be able to speak intelligently with Realtors and the public about how Home Staging can help houses sell no matter what the ecoomy is doing.  We know that when a house is ASP Staged and priced right, it will sell.  This in turn helps the Sellers keep more of their equity – no matter what their local economy is doing – as they won’t have to engage in a price reduction or as many price reductions as their un-Staged competition.   This also helps a Realtor earn more commission or keep more of their income when the house sells and does not sit month after month.  And in a strong market, an ASP Staged property will typically get more than one offer – and boost the ultimate sales price.   We also know that in terms of days on market, an ASP Staged property sells 2-3 times faster than the un-Staged competition in most markets, with some houses selling six times faster.

Use this information to help educate your clients about the benefits and need for professional ASP Home Staging!