Many cities and towns in the United States are booming when it comes to real estate. What this means is that people are flocking to these cities and buying homes left and right. And, when enough people are buying real estate, we enter a seller’s market which means that the supply of houses is lower than the demand for houses, thus creating a very competitive home buying environment.   If you live in a hot real estate market and plan on selling your property for whatever reason, now may be the time to do so. Here’s how to pinpoint the “best” time to sell your home and some tips for going about the process in the best way possible.   What defines “best time” You might be wondering what exactly makes a certain time better than others when it comes to real estate. It really comes down to the amount of time between listing the home on the market and closing on it. This time frame can drastically affect the price the home sells for because, in most cases, the longer a house is on the market, the less valuable it becomes. And, property  is on the market for too long without having received any offers, it can become what is known as a “stale listing,” which can lead to the house being sold way lower than its value.   The “best time” can also be defined by how much homes are sold for during that time frame. Some months, houses in a certain area sell for much higher than during other months.   The “best time,” then, depends on whether you want to sell your home quickly or if you want to sell your home for a high price. Oftentimes, these two intersect and you get the best of both worlds! However, it’s crucial to keep a close eye on the market regardless!   Let’s take Laguna Beach for example 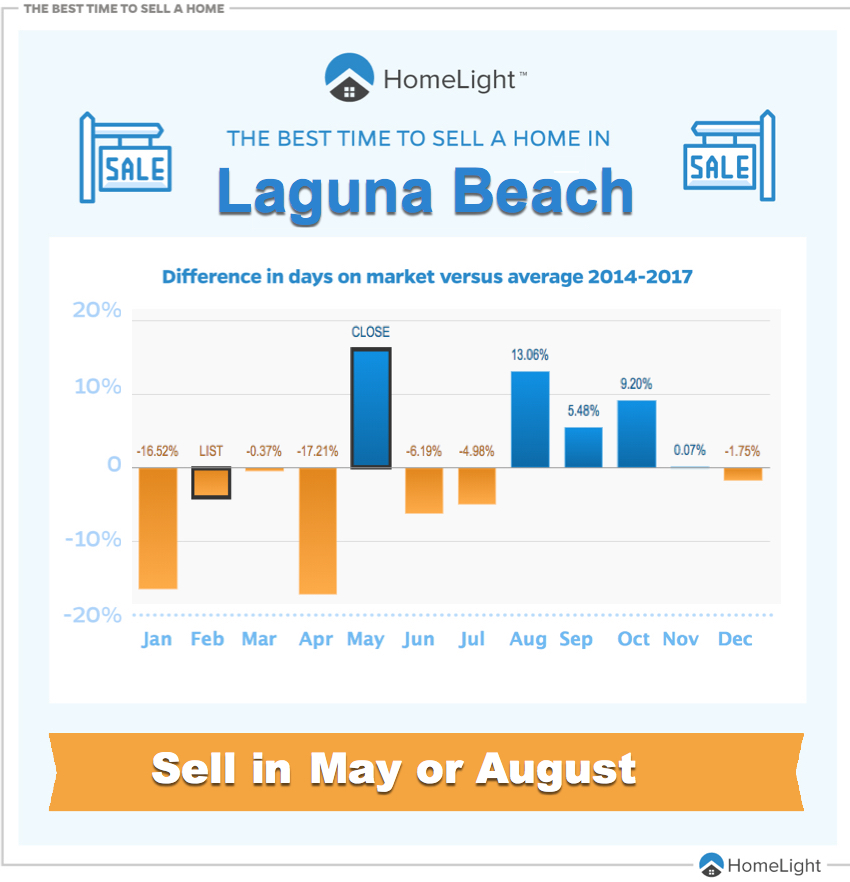 Laguna Beach in one of California’s most beautiful and most favored coastal towns. The gorgeous coastline and endless line of things to do attract people from all over the world. It’s also a perfect example of a place that’s in a hot market!   There are several “best times” and “worst times” to sell your home in Laguna Beach. According to data, you should avoid trying to close on your house in April if you want to sell it for a high cost because on average, houses sell for about 17.12% less in this month compared to other months. The best time to close on your house for a great deal in Laguna Beach is in May, which is oddly only a month away from April. Houses sell for about 16.17% more in May.   Trying to sell your Laguna Beach home quickly? You should also try to do so in April, since houses, on average, remain on the market for 15 days less. Be wary about this, though, since like we mentioned earlier, houses do tend to sell for lower prices during this month!   Other hot markets Of course, Laguna Beach is only one of hundreds of United States cities where people are pouring into. Here are some of the best times to sell in other United States cities that show similar patterns to Laguna Beach:   Tampa, FL: Best time to sell for more: July Best time to sell quickly: August   Marietta, GA: Best time to sell for more: June Best time to sell quickly: August   Los Angeles, CA: Best time to sell for more: June Best time to sell quickly: April   How to be smart about selling These statistics aren’t going to be as relevant if you go about selling your home in a poor fashion. We suggest planning well in advance, which can include staging your house while living in it if you can’t move out right away. Stagedhomes.com can help you with this process, especially given how tricky this can be. Happy selling!   Article submitted by:
Sarah Stilo Content Marketing Coordinator, HomeLight www.homelight.com